“ Doki Doki also known as Doki Doki Literature Club. Developed in 2017. It does warn it is not suitable for children however the graphics etc are clearly aimed at young people. This is the first game produced by Salvato and has won a number of awards since it was launched in August 2017. It was downloaded over 2 million times in the first 4 months.

In essence the story plot seems to be that a male character joins a literature club and interacts with female members. There are alternative endings depending on choices made during the course of the game. The story plot uncovers suicidal thoughts the members have. The multiple outcomes follow things such as mental health issues (voices in their head), self-harming, suicide and violent scenes such as one of the player’s neck snapping. All of this then links the reader back to an outcome whereby you are made to think the PC has taken over your computer and you have to continue playing. Some outcomes lead you to consider what you could have done to prevent one of the characters deaths. One even shows you messages from the players who have passed away saying “ now you can all be happy I am gone”. This is a psychological horror game with suicide as a main feature.

This game is free of charge but an upgraded version can be purchased for $10 to unlock extra content.

Prior to our contact the NSPCC Online Safety team had had no calls with regards to this game but they are now alerted to its existence.

As a result they reviewed information from their Childline Counsellor Facts notes since April 2017. Two counselling sessions had made notes with regards to Doki Doki – these were in November 2017 and January 2018. One talked about a friend playing the game. It was noted the game can trigger emotional responses. The other session noted the young person had been playing it and their favourite character had committed suicide – the young person was thinking about ending their life the same way.”

We will provide a fundraising pack containing 1 x t-shirt or running vest, 1 each of pen, pin & wristband.

Our business cards include our website and helpline details, and are perfect for giving to professionals you know.  Pop your details in here, and we’ll post you ten business cards to share.

We can provide bulk supplies of our booklet, Support After a Suicide, for a minimal fee to cover shipping. 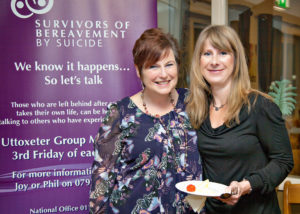 Since losing our son Jonathan to suicide in May 2011, we have done quite a lot of fundraising.  We have held boot sales, stalls at fetes, skydives and many, many raffles.

Two of our most successful events have been evenings – we have held an Elvis tribute night and a ladies only event with the “Chocolate Tailor” where we learned about making handmade chocolates.

Never underestimate how many raffle tickets you can sell – we have found that so many people have been touched by suicide and are glad to be able to help.

Since starting we have raised more than £5000.

In 2005 we tragically lost Fee – beloved wife and mother, when she took her own life. The shock and loss was enormous and it wasn’t until 2009 when we discovered Survivors of Bereavement by Suicide.  This charity has helped all three of us, in different ways, in coming to terms with such a painful loss.  It is a loss that you never get over, but their involvement in our lives has helped us to move on but not forget.

As a consequence we wanted ‘give something back’ by raising the profile of Survivors of Bereavement by Suicide and by raising some funds to assist with their good work.  As a family we cycled from Lands End to John O’Groats, visiting many support groups on the way.

We were amazed by peoples generosity and we raised over £23,000.